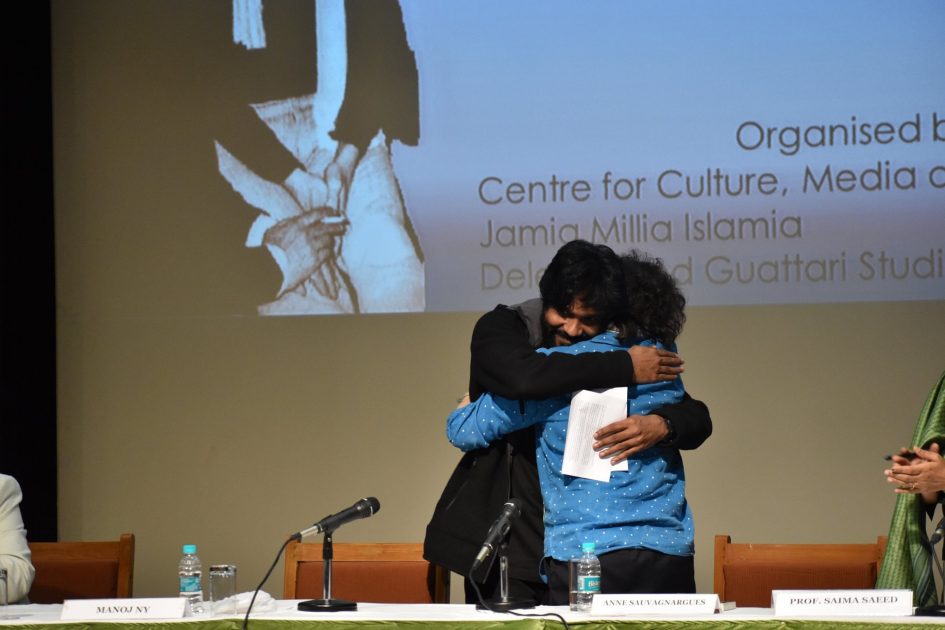 Configuring the Posthuman Technoscapes: Virtual, Digital, and the Machinic

Deleuze and Guattari between the Imaginary and the Virtual

In his programatic text How do we recognize structuralism?, written as a chapter of François Châtelet’s new history of philosophy book series, Deleuze presented an account of French Theory’s turn to language and to structural linguistics. While in this early presentation the main focus was put on the elaboration of ‘the symbolic’ in its opposition to the imaginary, Deleuze gradually developed the notion of ‘the virtual’ which could not be reduced neither to Lacan’s imaginary, nor to the more traditional philosophical categories of possibility and chance, as elaborated further in Lévi-Strauss, Althusser, etc. The paper presents an overview of the topic in Deleuze and Guattari’s basic works with special emphasis on the relation of the virtual to the machinic, placing it finally into the broader context of their bringing together of philosophy, science and art. The conclusion is made that Deleuze’s and Guattari’s account on language in A Thousand Plateaus brings about a major break, shifting the discussion from Deleuze’s formulas in his earlier readings of Sacher-Masoch, Kant, Melville, etc. to the ‘how to do things with words’ perspective, along with the invention of the new possibilities of life and a reshaping of the political.

Obsessed with cracks and crackups, fissures, fragments and fractures and crucially schizzes and schisms, I will explore broken and inclusive middles, interkingdoms and interworlds, and emergent chaos from cuts to the rend. My concern is with the tear, the rift, breakdown and the breakthroughs, trauma, madness, and the impossibility of the mend. I will explain this mad search through a mixture of American TV drama, the Japanese aesthetic of kintsugi (金継ぎ) and materials engineering. I want to gain an understanding of the line of transversality, the transversal crack and what this means for Deleuze’s philosophy.

Our discussion will be on what we might call Extreme Deleuze. This will focus on the meaning of the following: “mad Black Deleuzianism;” dark Deleuze; poststructuralist anarchism; anti-politics; utopia: negative Deleuze; outside thought: the nonthought within thought; geophilosophy and geocommunism. I will question the sustainability of these positions.

What is a book: “you either see it as a box with something inside and start looking for what it signifies, and then if you’re even more perverse and depraved you set off after signifiers. And you treat the next book like a box contained in the first or containing it. And you annotate and interpret and question, and write a book about the book, and so on and on. Or there’s another way: you see the book as a little nonsignifying machine, and the only question is “Does it work, and how does it work?” How does it work for you? The book is not an image of the world. It forms a rhizome with the world, there is a parallel evolution of the book and the world; the book assures the deterritorialization of the world, but the world effects a reterritorialization of the book, which in turn deterritorializes itself in the world”. Anti-Oedipus, the book of ethics (not on ethics), is less concerned with what or why “than with how”. How does one distinguish between the ‘neurotic phenomenon’ and the ‘psychotic phenomenon’, between Oedipalizing impulses and ‘anti-oedipal’/‘an-oedipal’ impulses, between a paradigm marked by ‘The Repressive Hypothesis’ and a paradigm unmarred by the metaphysics of repressive-liberation. How could this distinction offer contesting perspectives to the ‘philosophical’ and the ‘political’? “Legitimate philosophy” is the handiwork of “bureaucrats” of pure reason who speak in “the shadow of the despot” or in the language of the Names of the Father and are in historical complicity with the State. These “State Philosophers” in turn invent an absolute State that effectively functions in the psyche (“how does one keep from being fascist, even [especially] when one believes oneself to be a revolutionary militant?”). Thus the exercise of their thought is in conformity with the aims of the State, and with the requirements of the neuroticized Order of Things. The psychotic or schizo-position – which is a non-position – is, in contrast, aligned to what Massumi calls an “orphan line of thinkers affiliated only in their opposition to the State Philosophy that would nevertheless accord them minor positions in its canon”. By deploying Freud’s ‘writing’ of the Wolf Man’s life-history as the ground for the political Deleuze and Guattari move beyond the inherited separation of Freud and Marx, of the psychoanalytic and the political; a somewhat paradoxical communion is set up between the psychotic phenomenon and the political. Does this makes psychoanalysis schizoanalytic; and politics schizopolitical; where schizopolitics could be seen as an uncanny form of the political imagination beyond (a) the Oedipalized triangle State-Party-Masses, (b) the mothering of the repressed/oppressed masses into liberation by the vanguard Party and (c) a smothering of flows, intensities, multiplicities by the State.

On the Logic of Sense – Part I and II

My camp sessions will concern Logic of Sense. I plan to help us understand the strange structure of this experimental book in philosophy. More specifically, we shall try to understand certain concepts Deleuze develops in Logic of Sense. These include: the transcendental field and genesis (static in particular); the concept of event and its connection to time understood not as Chronos but as Aion; and ethics. The main focus of the camp sessions will be Series Twenty-Two, “Porcelain and Volcano,” where we shall try to understand the problem for the abstract thinker. If there is time, we shall also investigate Deleuze’s last published work, “Immanence: A Life.” This last text returns to the idea of the transcendental field developed in Logic of Sense.

The Third World as a Political Concept: Deleuze and Guattari’s Decolonization of Marxism (I &II)

The Conic Object and the Digital Unconscious: Digitality, the Uncanny, and the Virtual (I &II)

When Walter Benjamin postulated the concept of optical unconscious, he was obviously deriving his idea of the unconscious from Freud; that there is something to the object (image) that is more than meets the eye. Why then is there something where ones sees nothing? Because the object is more than the ontic existence it exhibits. There is an invisible tail, much larger than the object itself, attached to it, what is often understood as the uncanny. The Uncanny, or in Lacanian parlance, “the obj (a)”, is either an ordinary object that happens to occupy the position of “the Thing” a la Heidegger, or an actual unexplainable protuberance in rea ordinary reality. Following Lacan’s cue, Deleuze and Guattari further developed the second kind of object into the desiring machine, where Lacan’s structure of the object, according to Dan Smith, is turned inside out; emphasis flipped from lack to force, from epistemology to ontology. But object as desiring machine is certainly different from OOO’s belief that the object is hiding its essence unless its “essence” is not hidden “inside” the ontic object. The object is simply the tip on the virtual and is constantly negotiating with the virtual.

Now how does the digital object desire? It works in two ways. On the one hand, it desires us to see that it desires and on the other it desires us not to see that it desires. Contemporary cultural productions, especially science fiction and horror movies, are teeming with the imagination of the “malice of objects” of all kinds, which means to remind us of the fact that it desires us not to see that it desires. But these imaginaries are most likely not right on target because most of them are modeled on how the human consciousness works. But certainly the digital unconscious exhibits an even more uncanny potentiality, which has already infiltrated our life to an amazing extent and is consistently giving instructions as to how we should live in pretty much the same way as Freud imagined the unconscious worked. Thus, it is our urgent task to respond to the other half of the desire of the digital object and delve into exactly how the digital object desires. For that task, we need both to remind ourselves that the object, digital or not, is connected to the virtual and to enlist the Deleuzian materialist vitalism in order to accurately locate the origin of “malice”.

Multiplicities, Minorities and Subjectivities – Part I & II (Abstract yet to be added)

Lecture I What is a Literary Text? Reflections on Deleuze and Guattari

The topic of the nature and function of the text in general, and the literary text in particular, has been the subject of a long and fairly contentious history going back at least to Aristotle’s Poetics in the canonical western tradition.  Discussion of this topic, and the related topic of the nature and function of the author, has become even more vexed (and interesting!) in recent decades with the emergence of radically historicist perspectives on the natures of the text and the author.    According to these historicist perspectives, text and author are properly to be viewed as the realizations of many kinds of functions, with history supplying the conditions of possibility for the realization of these functions.  For the historicists, the text is not some objectivity or sheer facticity located ’out there’, serving as a repository of settled meanings and authoritative authorial intentions waiting to be discerned by the competent reader. I will locate the work of Deleuze and Guattari in this functional-historicist movement.

Guattari and Postmedia – Part I & II

French psychoanalyst Jacques Lacan (Guattari’s teacher) claimed that the unconscious is structured like a language. In Anti-Oedipus (1972), Deleuze and Guattari disagree with Lacan, instead claiming that the unconscious is a factory. In The Machine Unconscious (1979), Guattari delves deep into contemporary linguistics to elaborate on the unconscious-as-factory, paying particular attention to non-signifying and even non-semiotic components of expression. He finds the bits and pieces of the machinic unconscious scattered all around us, not only within the family (Freud’s focus) but also at school, at work, in the objects of daily life, or on television. In Chaosmosis (1992), Guattari suggests that “the machinic production of subjectivity” could lead either toward new ways of reductively homogenizing subjectivity, or toward the liberatory creativity of “a post-media era characterised by the reappropriation and resingularisation of the use of media.” These possibilities will be examined in light of Guattari’s various diagrams of the semiotic (and a-semiotic) production of subjectivity. How do today’s social networks contribute to the manufacture of the machinic unconscious? Are we indeed living in a postmedia era?